Sofitel Bangkok Sukhumvit - Luxury hotel - How to get to Suvarnabhumi Airport

How to get to Suvarnabhumi Airport from Sofitel Bangkok Sukhumvit! Suvarnabhumi Airport, also known unofficially as Bangkok Airport, is one of two international airports serving Bangkok, the other one being Don Mueang International Airport. The name Suvarnabhumi (pronounced “su-wan-na-poom”) was chosen by HM King Bhumibol Adulyadej, which means “The Golden Land”, specifically referring to continental Indochina. “Golden Land” is a traditional name for the Thailand-Cambodia-Laos-Burma region.
Suvarnabhumi covers an area of 3,240 ha (32.4 km2; 8,000 acres), making it one of the biggest international airports in Southeast Asia and a regional hub that hosts 95 airlines. The airport is located in Racha Thewa in the Bang Phli district of Samut Prakan province, 30 kilometers east of Bangkok. It officially opened for limited domestic flight service on 15 September 2006, and opened for most domestic and all international commercial flights on 28 September 2006. In getting from Sofitel Bangkok Sukhumvit to Suvarnabhumi Airport using public transport you have several options, including the Skytrain, private taxi, public bus, shuttle bus or various Bangkok limousine services. Given Sofitel Bangkok Sukhumvit’s convenient location just a short walk to either Nana or Asok BTS Skytrain stations, the Skytrain can be the fastest way to go, depending on the time of day and traffic. There are two ways to do it, Airport Rail Link operates a train from Sukhumvit MRT to Suvarnabhumi Airport (BKK) hourly. Or you can go from either Nana or Asok station to Phaya Thai station where you transfer to the Airport Rail link, which operates daily from 06:00 to 24:00 with commuter City Line trains departing every 10 minutes during peak hours (06:00-09:00 and 16:00-20:00) and 15 minutes off peak and weekends.
Of course, if your trip to the airport falls at an odd hour outside of normal BTS hours, going by taxi is always an option. The concierge at Sofitel Bangkok Sukhumvit will be happy to call one to pick you up right at the hotel’s front door.

And then, to really go First Class, there are Bangkok limousine services available to whisk you to the airport or any points in between. Bangkok Airport Limousine is a limo service based at Suvarnabhumi Airport that specializes in individualized airport transportation. Bangkok Airport Limousine has 6 types of limousines with a total of 380 cars available around the clock, with fares set at fixed rates and optional VIP Fast Track Service. Another Bangkok limousine service is Backlane Chauffeur Services, providing chauffeured vehicles of various sizes for getting around town. 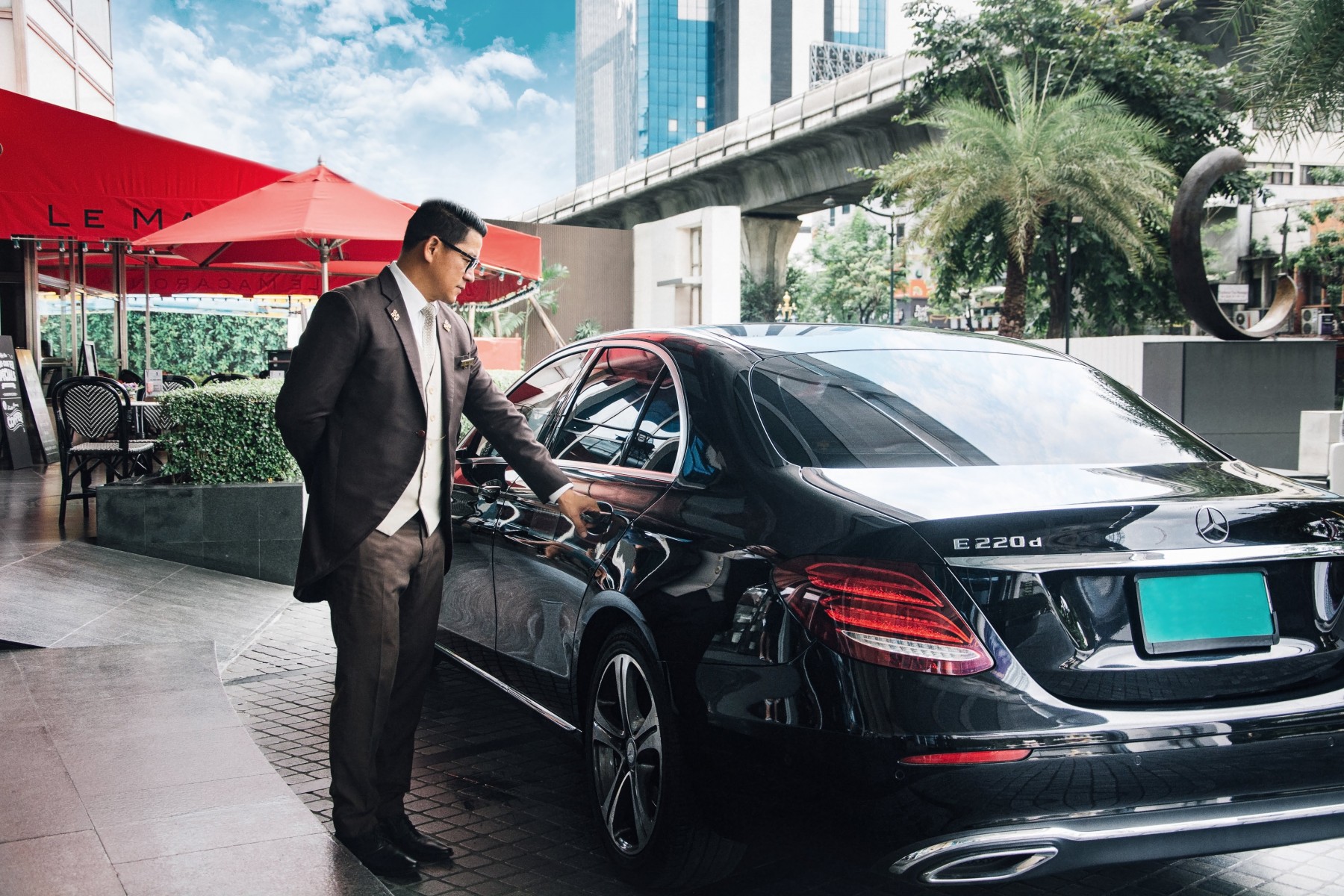 But to really begin your journey in abject excellence, travel in style with the stylish Bangkok limousine services available right here at Sofitel Bangkok Sukhumvit. You can’t beat Sofitel’s limo fleet for convenience, choose your ride from our fleet of classy coupés, then sit back and listen to our unique music playlists in the limo as our chauffeur navigates you through the huge, diverse, and at times overwhelming urban jungle called Bangkok. Seamless luxury comes with a cup of coffee and croissant for those guests travelling in mornings before 10am. Make your musical selection, read the paper, and relax in style on your way to the airport, or anywhere else you may want to go, with our By-the-Hour service offering prestigious intra-Bangkok travel.
Using Sofitel’s in-house limo service by the hour allows the most flexibility in your travel arrangements, and our chauffeurs are on hand to facilitate your every demand. Sit back, relax and leave the driving to us.