Sofitel Bangkok Sukhumvit - Luxury hotel - Top 10 Things to do in Bangkok in 3 Days!

Top 10 Things to do in Bangkok

Bangkok is a city that brings your senses alive and with so many things to do in Bangkok, boredom is never in the equation. The food, people, street life and colorful contrasts explain why
Bangkok is the most visited city in the world
. The city began as a small trading center on the banks of the Chao Phraya River 200 years ago and tucked in between Bangkok’s dazzling malls and modern architecture the grandeur and glory of its illustrious past is still found.
Bangkok’s 400 temples, royal palaces and world-famous floating markets
contrast as effortlessly as the aromas from a plate of Padthai with its vibrant markets, climate-controlled megamalls and cosmopolitan nightlife. Infused throughout is the unique Thai-ness of sanuk, the playfulness and fun that defines Thai character. There are so many things to do in Bangkok that 3 days in Bangkok will hardly seem enough, but stay as long as you can in this spectacular heart of Southeast Asia. At Sofitel Bangkok Sukhumvit we make it easy choosing where to stay in Bangkok, our blend of French sophistication and Thai culture will highlight the many treasures of the City of Angels for you with genuine hospitality and bespoke luxury. 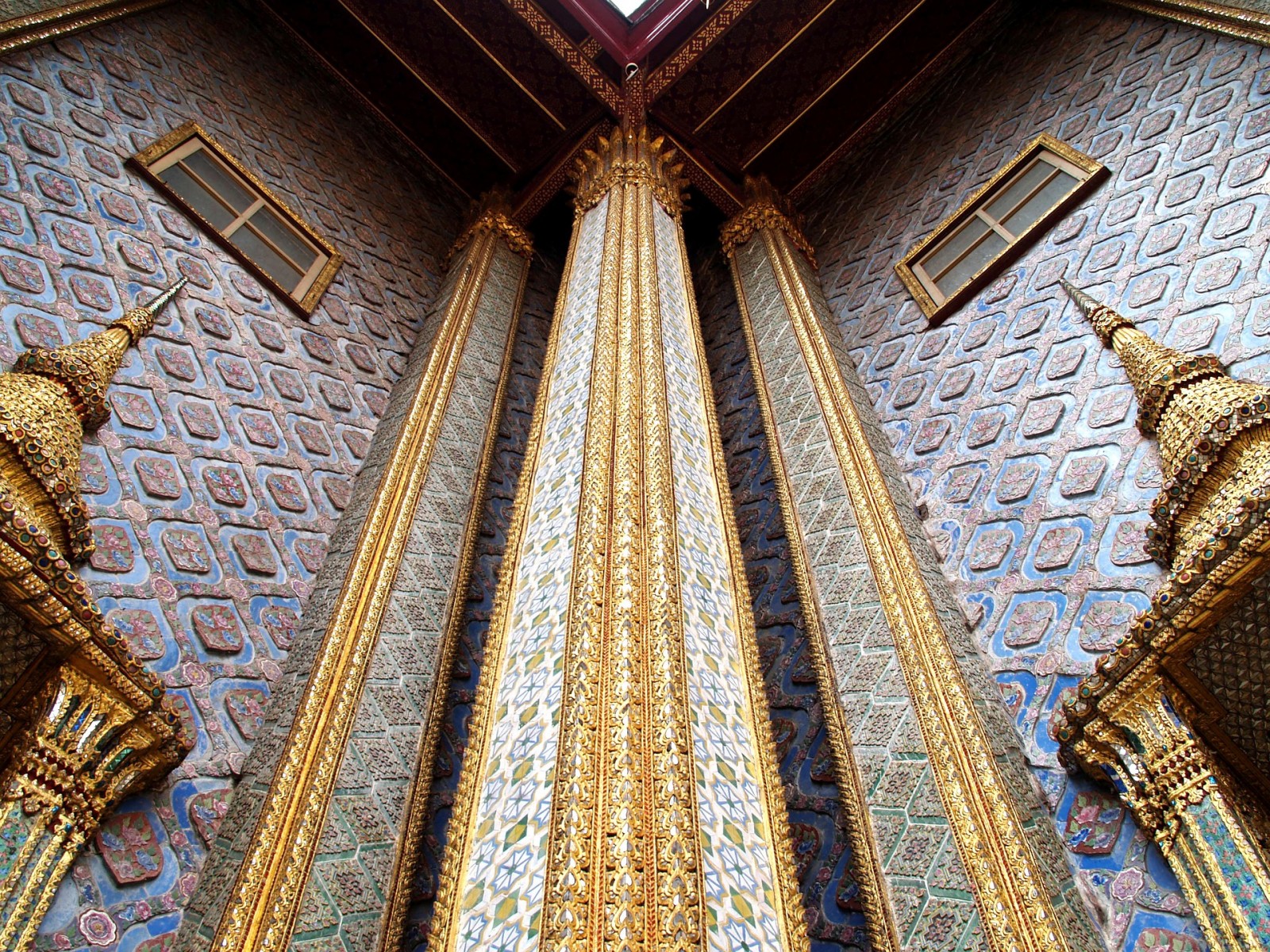 Although Bangkok is a city of effortlessly blending contrasts, one thing is ever present – the HEAT. Yes, Bangkok does hold the title as the world’s hottest city. It’s not because daily highs are that hot, it’s more because the city remains hot all year long. The annual mean air temperature is 28C, with the hottest months generally falling from March to May. Any time of year will be hot, with slightly lower humidity levels from November through February. With Thailand’s New Year, Songkran, falling right in the middle of the hot season in mid-April, it’s no wonder the national holiday is often called the Water Festival, when throngs of fun-loving Thais and foreigners alike let their hair down and the water fly for 3 days in Bangkok of refreshing and rambunctious water-throwing revelry. There’s no better place to join in on the fun than Khao San Road ,Bangkok’s colorful backpacker central in the Old City, for the biggest and best water fight on the planet. 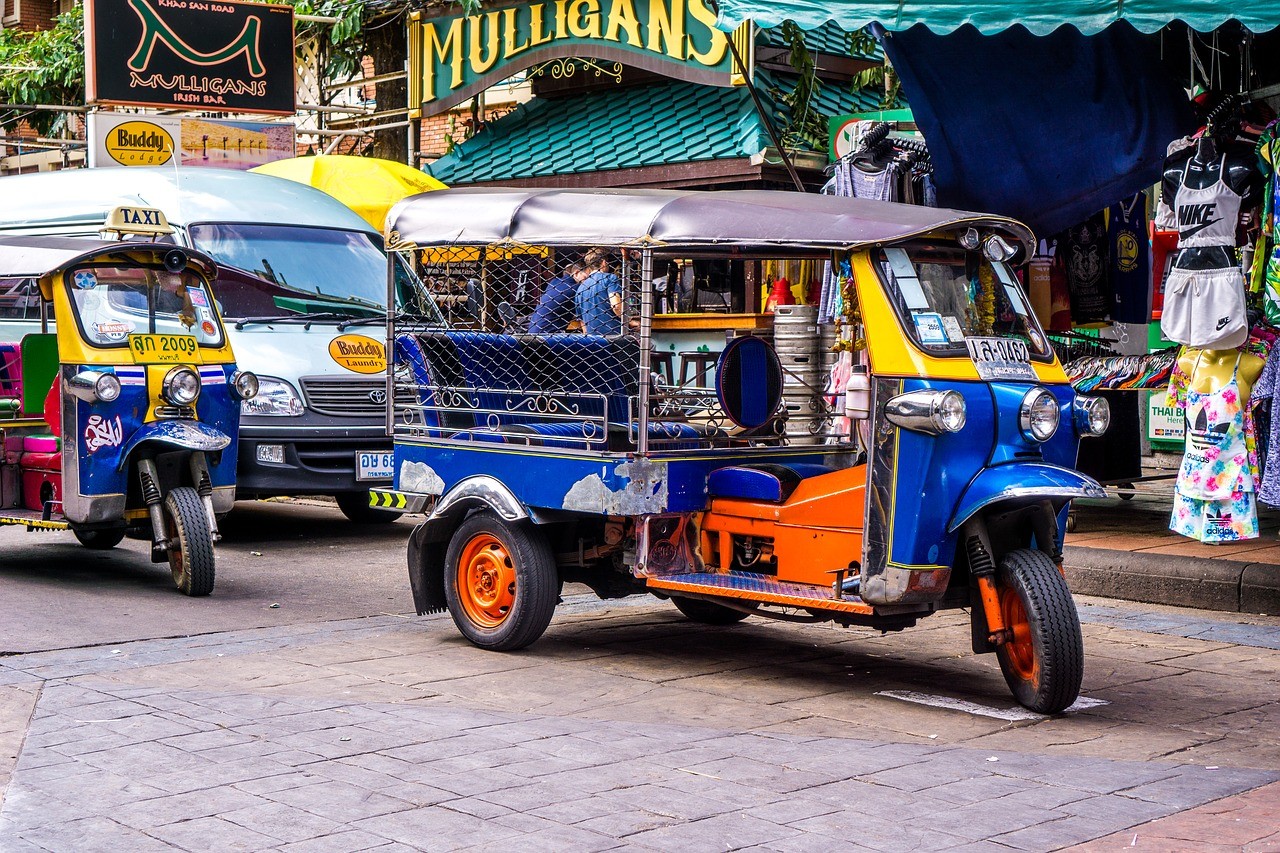 There is an endless list of things to do in Bangkok, but if you have at least 3 days in Bangkok you can see and experience an amazing cross-section of Thai culture. Here are a few worthwhile attractions to put on your list. 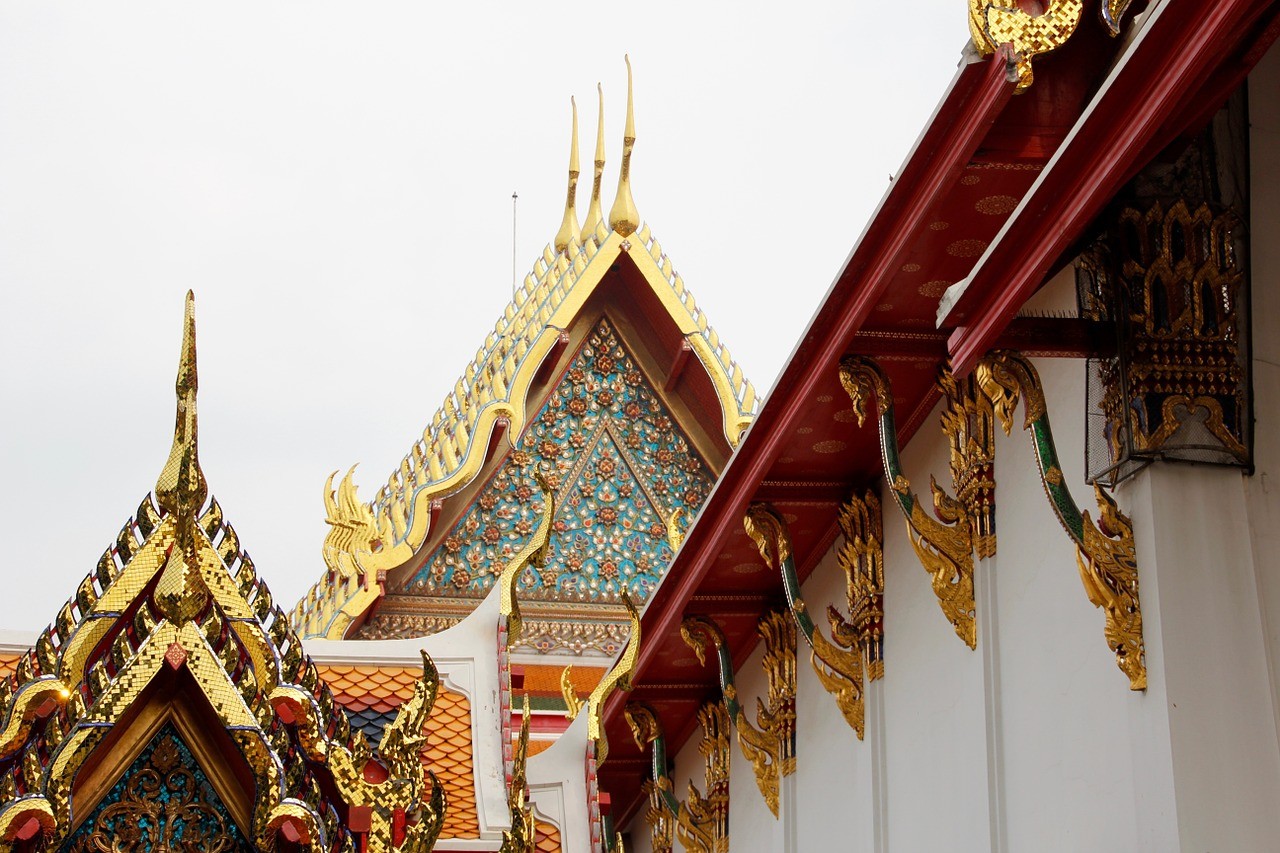 Wat Arun is a riverside temple in the Khmer style which is seen often in postcards and advertisements of Bangkok. The main feature is its central tower which gets camera shutters clicking with every river taxi that passes. Its tall spire dates from sometime before 1656 when it first appeared on French maps. A recent renovation was just completed in 2017 bringing its ancient appearance back to a shining white. One of the more pleasant things to do in Bangkok at the end of the day is enjoy a cool drink from the rooftop bar at Arun Residence , directly across the river from Wat Arun. The setting sun on Wat Arun and increasing lights from passing river dinner cruise boats is nothing short of magical.

Banglamphu is the name of the surrounding neighborhood of Khao San Road, and encompasses many of Bangkok’s top attractions (like the Grand Palace and several museums). The nearby sois in this old part of Bangkok are offbeat eclectic areas that have remarkably maintained a genuine Thai-ness and charm.

When shopping in Bangkok , open air markets are the true face of commerce and Chatuchak Market is the king of them all, being the world’s largest weekend market and one of the best markets in Bangkok. With more than 15,000 stalls , you would need 3 days in Bangkok just to see Chatuchak! It’s best approached as a must-see sight rather than a shopping destination, so keep hydrated with coconut ice cream and Thai iced tea, pace yourself and get a foot massage to revive, get a map and use it, but expect to still get lost at least a half-dozen times. You can use the clock tower as a handy landmark.

Wat Pho is one of Bangkok’s largest and oldest temples and existed before Bangkok was established as the capital by King Rama I. Wat Pho is regarded as Thailand’s first university and a center for traditional Thai massage. It served as a medical teaching center in the mid-19th century before the advent of modern medicine, and the temple remains a school for Thai massage and center for traditional medicine as a private school for Thai medicine founded in 1957 and still operating. Wat Pho is home to more than 1,000 Buddha images (the largest collection in Thailand), as well as Bangkok’s largest reclining Buddha, at 46 meters in length. 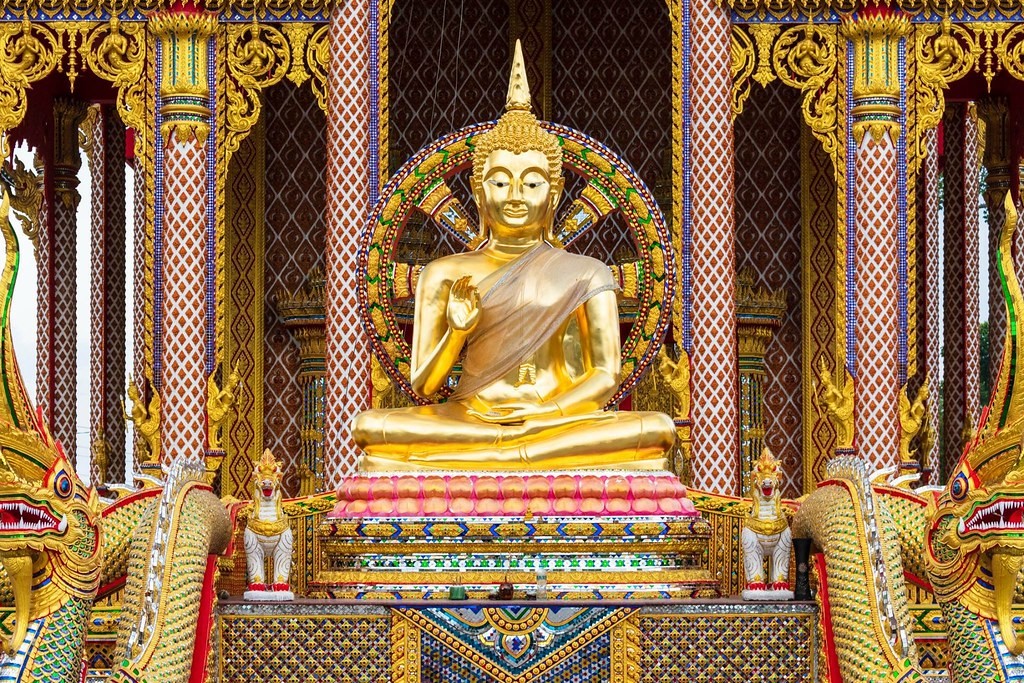 The Golden Buddha has one of Thailand’s more interesting stories behind it, spanning several centuries. The origins of the statue are uncertain, but it’s believed to be from the Sukothai period of the 13th-14th centuries. The statue was probably moved from Sukhothai to Ayutthaya around 1403. At some point, the statue was completely plastered over to prevent it from being stolen. This plastering-over likely took place before the destruction of Ayutthaya by the Burmese in 1767. The statue remained among the ruins of Ayutthaya without attracting much attention until King Rama I ordered that various old Buddha images be brought to Bangkok from the ruined temples around the country in 1801. King Rama III (1824-1851) had the statue, still covered with stucco, installed as the principal Buddha image in the main temple building of Wat Chotanaram in Bangkok.

When Wat Chotanaram, near Chinatown, fell into disrepair and was closed, the statue was moved to its present location at nearby Wat Traimit in 1935. Then, in 1954 a new building was built at the temple to house the statue. As it was being moved to its new location on 25 May 1955, its immense weight snapped the ropes and the statue fell. At that moment, some of the plaster coating chipped off exposing the gold underneath. Work was immediately stopped so that an evaluation could be made. All the plaster was carefully removed and during the process, photos were taken which are now displayed in the temple for visitors. When all the plaster was removed, it was found that the gold statue actually consists of nine parts that fit smoothly together. A key was found encased in plaster at its base which can be used to disassemble the statue, allowing for easier transportation. The golden statue was discovered very close to the commemoration of the twenty-fifth Buddhist Era so many Buddhists regarded the occurrence as miraculous. The 5.5 ton solid gold statue can be viewed daily, admission 40 baht.

Your list of things to do in Bangkok wouldn’t be complete without some museums, and the Jim Thompson House is one of the most popular, housing the art collection of American businessman and architect Jim Thompson, the museum’s designer and former owner who settled down in Bangkok after serving in the OSS (precursor to the CIA) during WWII. His neighbors’ handmade silk caught his eye and his business acumen turned that interest into a silk empire that still exists today. It ended for him, however, in 1967 when he mysteriously disappeared while hiking in the Cameron Highlands in Malaysia. His disappearance has never been solved.
If you’re ready for a break from Bangkok’s busy streets, head over to Lumphini Park with its half million square meters of manicured lawns, water features and flower gardens. Join the locals in strolling around, laying on mats for an afternoon nap, doing various fitness activities, and enjoying live music on the weekends. Naturally, there are lots of food vendors near the gate at the Rama VI statue, making an instant picnic possible any time. 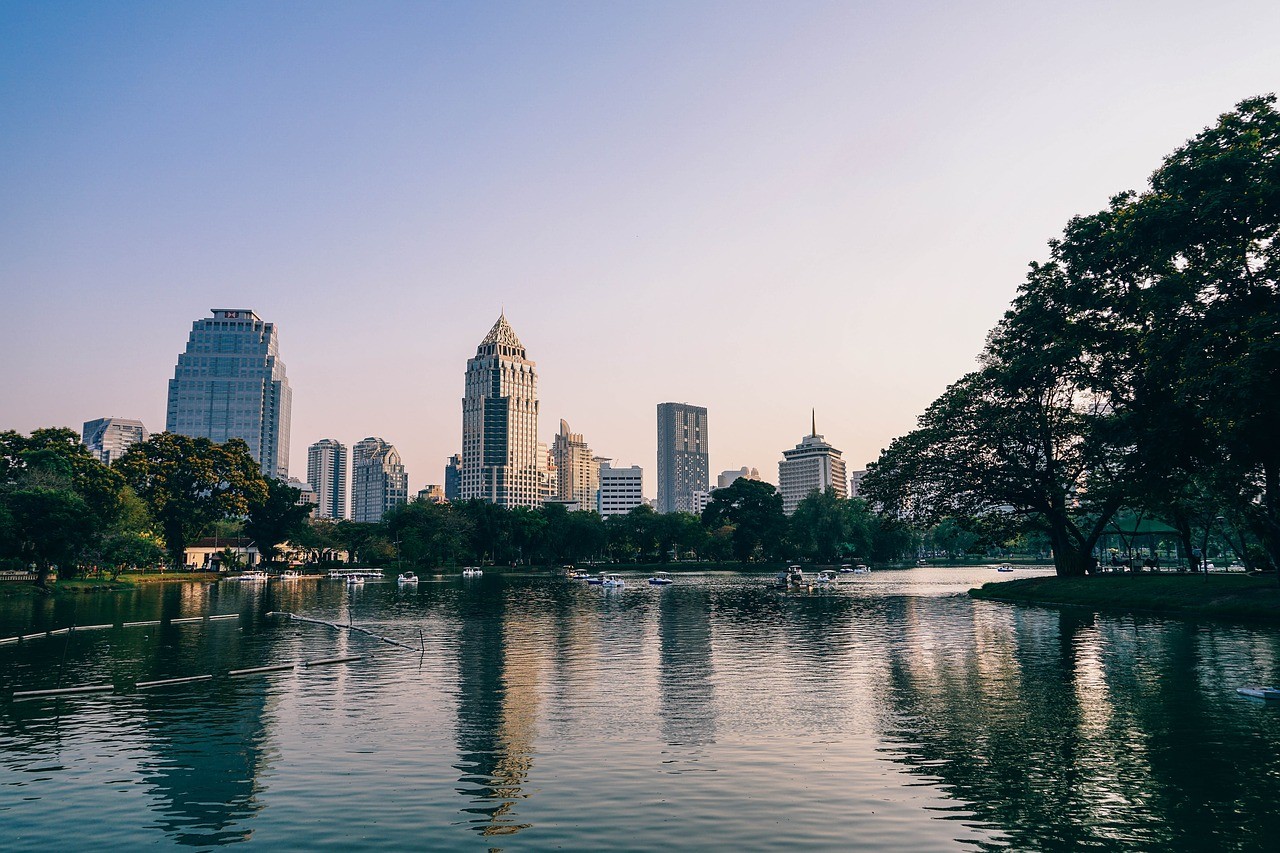 For unique boutique shopping in Bangkok by the river, Asiatique has pulled off a hat trick by combining two of the most popular ways to go shopping in Bangkok: a night bazaar and a mall. Ten minutes downriver from Saphan Taksin BTS station this once-bustling international trade port has become one of the best markets in Bangkok, with over 1,500 boutiques and 40 restaurants housed under a huge replica warehouse complex. Starting daily at 4pm, have fun browsing the boutiques, sampling the food or picking up gifts or something for yourself, and if that isn’t enough entertainment, Calypso ladyboy cabaret showss and Muay Thai matches are performed nightly. 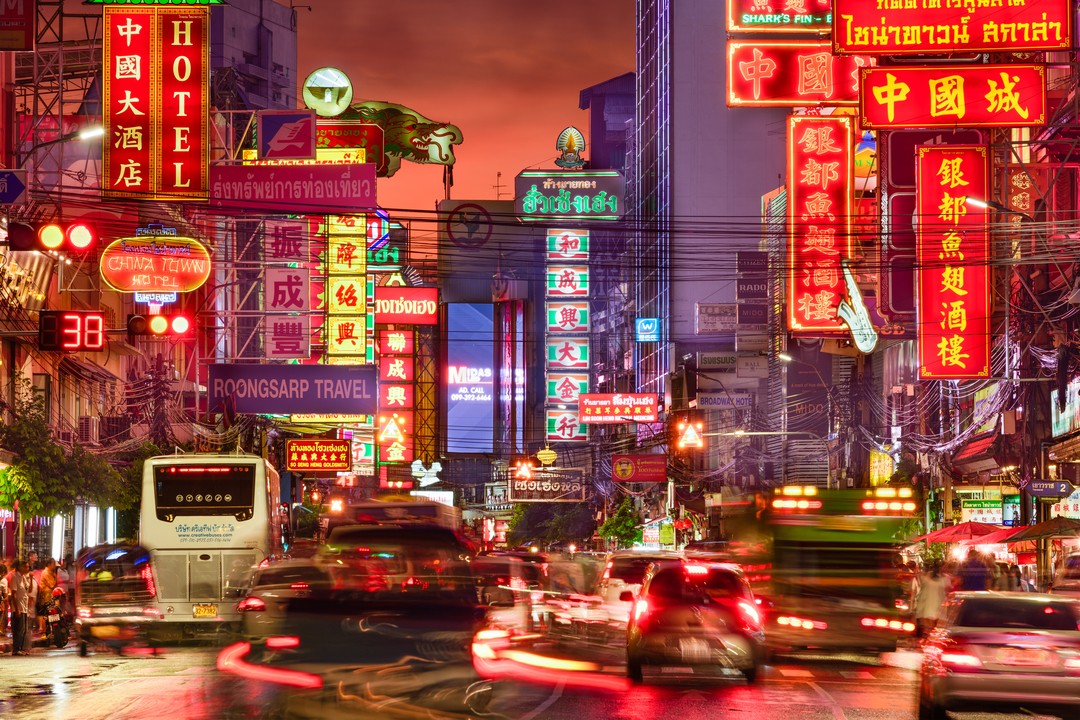 To get the flavor of Bangkok at its peak “Thai-ness”, head over to
Chinatown , known locally as Yaowarat Road. Chinese merchants moved to the east bank of the Chao Phraya River in the early 1780’s, making Chinatown the oldest neighborhood in Bangkok. The area was defined by trade then and it still is today. Chinatown isn’t considered an actual tourist attraction. Rather, it’s a genuine Chinese neighborhood where people work and live. The streets of Chinatown are vivid and hectic – packed full of people, market stalls, and the best markets in Bangkok for buying gold. Bangkok’s Chinatown is considered the largest in the world, with endless alleyways and stalls. In the daytime, shops and stalls sell products at some of the cheapest prices in the city and at night the area is transformed into a street food heaven, with vendors stretching off into the distance. A day exploring vibrant Yaowarat is one of the most colorful things to do in Bangkok. 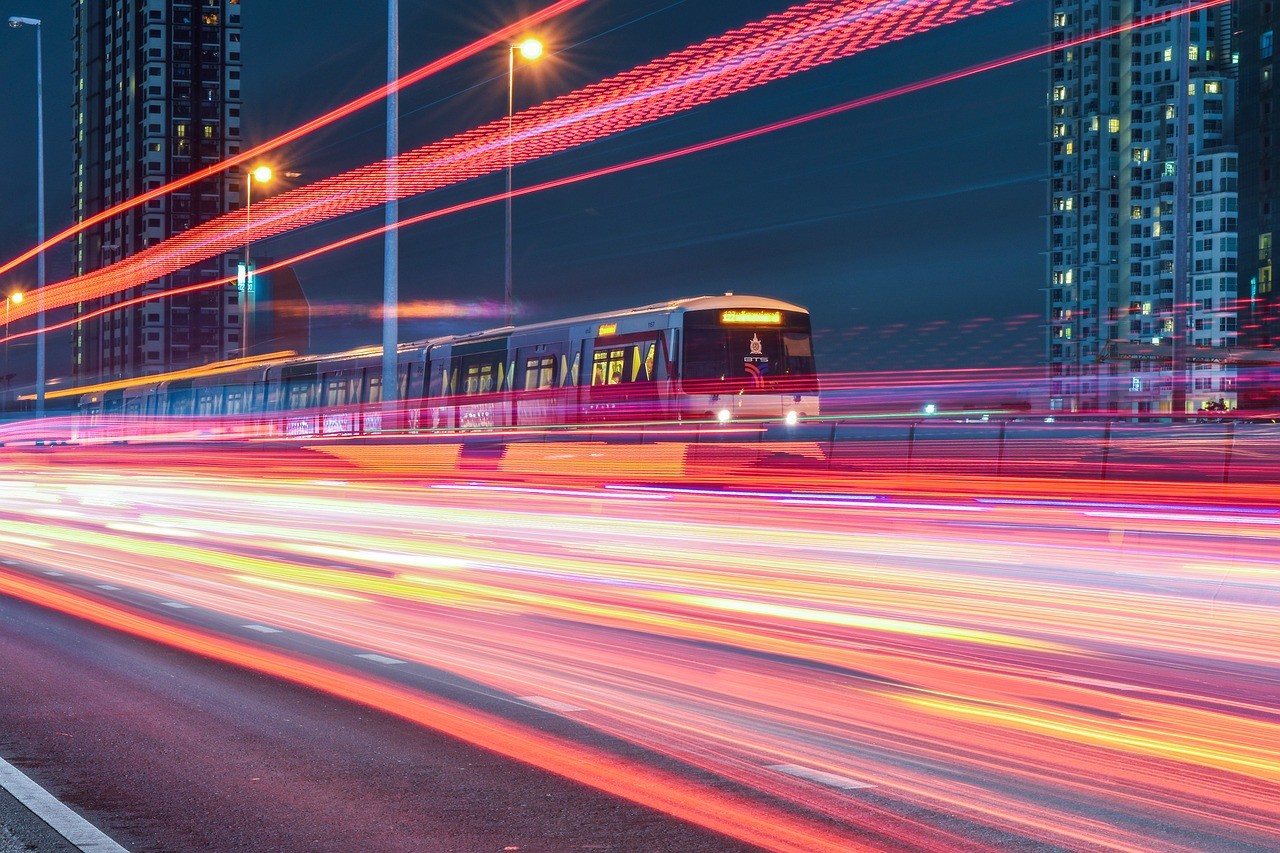 Where To Stay in Bangkok

One of the best areas when considering where to stay in Bangkok is the Siam Square/Sukhumvit area, home to Sofitel Bangkok Sukhumvit, with its great shopping, street life, and easy access to the Skytrain . Some of the best mall shopping in Bangkok is found in Siam Square, and as you move east into the Sukhumvit area the activity moves out onto the streets and alleys – boasting some of the best markets in Bangkok to be found on its bustling sidewalks. Street food is an especially robust commodity in Sukhumvit. Both areas are well connected by the Skytrain and subway with the rest of Bangkok, making Sofitel Bangkok Sukhumvit an ideal and sumptuous base from which to explore this vibrant city. Sofitel Bangkok Sukhumvit has much more on offer than luxurious accommodation, our life-enriching offers include specials on accommodation, dining, special events, meetings, spa treatments, our affiliated beach resorts, drink specials and much more.

The Riverside area is where you’ll find many other Bangkok hotels. It’s a good distance from here to the shopping of Siam Square but if you stay close to the Skytrain it’s very manageable. Many of Bangkok’s top cultural attractions are near the river so if you’re here for sightseeing the Riverside area is centrally located. Trips along the river are a great outing and longer trips on private boats are easily arranged along the riverfront.

Khao San Road is a 1 km stretch of shops, bars, restaurants, and street vendors and is home to the backpacker scene. The surrounding neighborhoods have some good mid-range hotels and are adding more mid-range hotels and boutiques every year. It’s one of the cheaper areas in the city and where to stay in Bangkok if you’re on a tight budget or want to be close to its many cultural and historical attractions. The Skytrain and Metro don’t connect to the Khao San area, so its limited transportation access may affect your decision of where to stay in Bangkok.